Tips for those considering an electric car


Tips for those considering an electric car

How do you choose the green car solution that is best for you?

Our needs are different, some have a long way to work, while others may not be able to leave the car at home, but must do so at work or on public roads. And how far does an electric car like that actually go? Etc. The questions are many and justified, because it is a new way you will in the future to shop and use your car. It can be a bit of a puzzle to figure out what to take into account when buying an electric car. Here are some of the topics that, in our opinion, are important for you to consider as a future electric car owner:

What is your driving needs - how far do you go every day?

New electric cars today can travel between 200 - 500 km on a charge. It is important for you to assess how much you will drive per day/week when choosing an electric car. According to FDM, Danish drivers drive an average of about 40 kilometres a day, which is a driving need that electric cars can easily cover[2]. If we look exclusively at the Sønderborg area's motorists, the average is estimated to be slightly higher, about 50-80 kilometers per day.

Please also note that the car will consume more power during winter months or hot summer months when the air conditioner needs to heat/cool the cabin, just as your driving pattern will affect electricity consumption.

Most electric cars on the market today also have a feature in the car that helps you plan longer trips according to charging needs.

How do I charge my car?

Of course, it is essential that you can charge your car when it lacks power. Detached homeowners have the advantage of being able to set up their own barns on the land register. Citizens of residential buildings typically do not have that option and have to find a public stand. In Sønderborg city there are currently about 17 public charging points. You can find a map of all the area's public charging points and providers on this map:

Map of charging points in Denmark 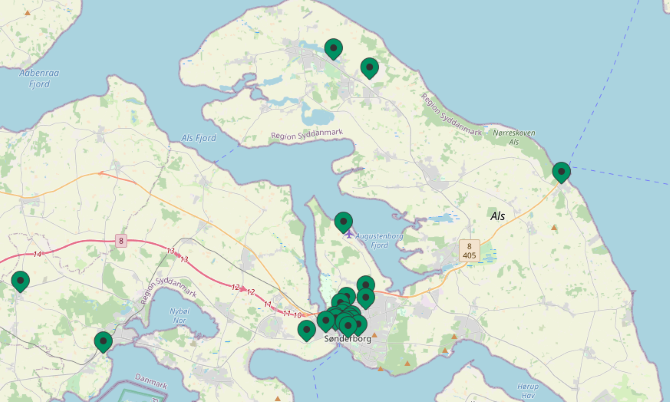 You can also seek more knowledge and inspiration about electric cars at sønderborg area's many car dealers.

The electric car is the green choice

The plug-in hybrid car (PHEV) has two engines, one electric drive and one petrol/diesel engine. The car's engine controls that it runs on power, typically on the first 40 – 60 km, and the internal combustion engine is activated when the need arises, e.g. when the battery is running low. After that, the car acts like a regular petrol/diesel car.

The European Commission announced in April 2021 that due to the EU's new taxonomy, hybrid cars cannot be categorised as green from 2026. This will affect banks' ability to finance hybrid cars with cheap green loans, but at the same time strengthen the political focus on the clean electric car solution, in order to achieve the Folketing's 70% target of 750,000 – 1 million green cars by 2030 – with electric cars as the right solution.